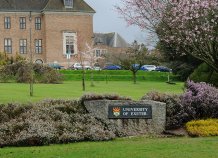 The researchers have shown significant influence in their field(s) through publication of multiple highly cited papers.

Twenty-one researchers from the University of Exeter have been recognised as leading experts in Clarivate’s annual highly cited researchers list.

The award, now in its ninth year, recognises researchers who demonstrated significant influence in their chosen field or fields through the publication of multiple highly cited papers during the last decade, based on the Web of Science citation index.

The Highly Cited Researchers™ 2022 list uses both quantitative and qualitative analysis to identify individuals from across the globe who have demonstrated significant and broad influence in their chosen field or fields of research.

The list features sixteen researchers from the University of Exeter and a further five with affiliations to the University across multiple disciplines.

Professor Lisa Roberts, Vice-Chancellor of University of Exeter, said: “We are thrilled that so many of our incredible researchers have once again been recognised in this Highly Cited Researchers List.

“It is a testament to their dedication and the quality of research undertaken within our community here at the University of Exeter. We’re all immensely proud of each of them and I wholeheartedly congratulate them all, as well as all colleagues and the wider team for their encouragement and support.”

David Pendlebury, Head of Research Analysis at the Institute for Scientific Information at Clarivate said: “Research fuels the race for knowledge and it is important that nations and institutions celebrate the individuals who drive the wheel of innovation.

“The Highly Cited Researchers list identifies and celebrates exceptional individual researchers at the University of Exeter who are having a significant impact on the research community as evidenced by the rate at which their work is being cited by their peers.

“These individuals are helping to transform human ingenuity into our world’s greatest breakthroughs – and it is an honor to celebrate their achievements.”

The University of Exeter researchers on this year's list (with dual affiliation listed where appropriate) are: