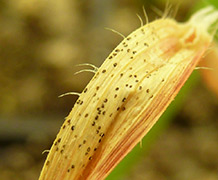 Almost half of Europe's wheat crops are affected by fungal infection

Harmful fungal toxins in wheat: A growing threat across Europe

Harmful fungal toxins are on the rise in Europe’s wheat and affect almost half of crops, according to a new study.

Wheat – the most widely cultivated crop in the world – is under growing attack from harmful toxins. Across Europe, almost half of wheat crops are impacted by the fungal infection that gives rise to these toxins, according to a study led by the University of Bath, in collaboration with colleagues at the University of Exeter.

These troublesome ‘mycotoxins’ are produced by the fungus that causes Fusarium Head Blight, a disease that affects wheat and other cereals growing in the field. Eating products contaminated with mycotoxins causes sickness in humans and livestock, such as vomiting and other gastrointestinal problems. Mycotoxins are also bad news for farmers and the economy because they reduce the grain’s value.

Wheat plays a huge role in feeding humanity, providing 18 per cent of the total calories in people’s diets globally. Concerns both for our health and for global food supplies were the impetuses for the new study.

Professor Sarah Gurr, chair in Food Security at the University of Exeter, said: “We need to be vigilant in testing for mycotoxins in grain. We each eat around 66kg of wheat flour per year – for example, in pasta and bread – and it’s important for wheat to be protected from Fusarium infection so as to mitigate this risk.”

Fungal biologist Dr Neil Brown from the University of Bath, who led the study, said: “Contaminated crops and Fusarium toxins are always a worry, as they pose a significant threat to our health, especially as we only partially understand their effects on our wellbeing.

“But on top of these health concerns, we must remember that wheat is a hugely important global crop, so it’s essential for us to maintain high yields along with safe food production – not least because climate change, and now the war in Ukraine (the world’s fourth largest exporter of wheat), are already impacting on wheat yields and grain prices.”

Preventing toxin contaminations is therefore important both to help maintain the stable price of wheat and to protect our food security, ensuring global stability.

The research team examined the largest datasets available from governments and agribusiness, both of which monitor Fusarium mycotoxins in wheat grain entering our food and animal feed supply chains. By using data from across Europe (including the UK) from the past 10 years, the team built the most complete picture yet of the mycotoxin threat and how it is changing.

Fusarium mycotoxins were discovered in every European country. Half of the wheat intended for human food in Europe contains the Fusarium mycotoxin “DON” (commonly referred to as vomitoxin) while in the UK, 70% of wheat is contaminated.

Governments set legal limits on DON contamination levels in wheat that is to be consumed by humans. These regulations provide effective protection, with 95% of wheat destined for the table meeting the safety limits for DON concentration. However, the finding that mycotoxins are ubiquitous is concerning, as the effect of constant, low-level exposure to mycotoxins in our diet over the course of a lifetime is not known.

When mycotoxins reach a certain level, the contaminated grain is diverted from human food to animal feed. “This comes at a cost to the cereal farmer, impacts cereal market prices, and shifts the health problem to our livestock.” said Dr Brown.

Ms Louise Johns, a PhD student in Dr Brown’s group, said: “It’s far higher than in human food. This is a concern for animal health, but it also paints a picture of what mycotoxin levels in food wheat could look like without current regulations.”

For the first time, the team has put a price on the impact of Fusarium Head Blight mycotoxins by estimating the value lost due to wheat being too contaminated with DON for human consumption.

“Across Europe, we estimate that 75-million tonnes of wheat (5% of food wheat) exceeded the limit allowed for human consumption between 2010 and 2019. Downgrading this to animal feed equates to a loss of around 3,000 million euros over the last ten years,” said Ms Johns.

Alarmingly, the researchers found that a quarter of food wheat containing the mycotoxin DON also contained other Fusarium toxins. And this is likely an underestimate because not all wheat is routinely tested for other toxins. This means other potentially harmful toxins are likely to be slipping beneath the radar. It’s possible that these toxins interact synergistically with DON to have adverse health effects that are greater than one toxin working alone.

Dr Brown said: “We don’t understand the health implications of being exposed to multiple toxins at the same time, especially when that exposure is chronic. We’re worried about growing levels of co-contamination and possible synergies between toxins.”

Fusarium Head Blight is a disease that fluctuates year-to-year, but the authors of this study have found that in the Mediterranean, mycotoxin levels in high-disease years have become more severe since 2010. Here, mycotoxin levels recorded during the 2018 and 2019 outbreaks were higher than at any other time this decade. Climate change and changes to farming practices are thought to play a role in the increase.

Study co-author Professor Dan Bebber from the University of Exeter Department of Biosciences added: “It’s vital that we have better systems to monitor how Fusarium Head Blight disease is changing in the field and to predict which environments are most at risk in the future.”

The team hopes that by exposing the scale of the Fusarium mycotoxin problem, their study will highlight the importance of controlling mycotoxins and stimulate further research.

Dr Brown believes the development of better ways to protect crops against fungal pathogens “is the only way for us to successfully mitigate the negative economic and health impacts of mycotoxins.”

He said: “As mycotoxin outbreaks become more severe in the future with climate change, this issue is only going to become more important.”

“Health threat and cost of Fusarium mycotoxins in European wheat” is published in Nature Food.

This research was funded by the Royal Society and Global Food Security. Louise Johns was funded by a University of Bath URSA studentship and supported by a British Society for Plant Pathology Covid-19 student support grant.