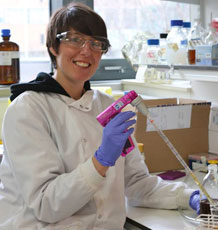 I have a broad interest in pathogenic bacteria. I have spent seven years working with a well-known hospital acquired bacteria called Clostridium difficile and now work on a project with the opportunistic pathogen Pseudomonas aeruginosa.

I have a strong molecular microbiological background and also some experience with bioinformatics. I am interested in understanding the mechanisms by which pathogenic bacteria adapt and cause disease in the host environment.

I am a post-doctoral researcher working with Dr Steven Porter. My current project involves looking at the interaction of kinases in specific two component signal transduction systems of Pseudomonas aeruginosa.