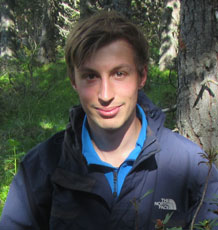 I am a final year PhD researcher at the University of Exeter’s Centre for Ecology and Conservation, based at the Penryn Campus in Cornwall. I am part of the Fundamental and Applied Biogeography group. I  look at species newly establishing in Great Britain which have arrived under their own powers of dispersal.

I am interested in the intersection of science and society where policies must be developed to protect the natural world and we who rely on it. My research will investigate the effects of Natural Colonists with their new environment, using cutting edge modelling techniques. Moreover, I will broaden this perspective by using a range of methods from the social sciences to understand current shortfalls in the management of these species and potential pathways to improvement. My aim is to improve the monitoring of non-native species regardless of their origin.

Prior to embarking on this studentship with Dr Regan Early, I did a Master’s course in Biodiversity, Conservation and Management at the University of Oxford, with a thesis examining media coverage of human movements of wildlife.

If you are interested in following updates on this project!

Considerable scientific and political attention has been paid to the issue of introduced species within the UK. However, comparatively less focus has been given to the potential impacts of those that have arrived by natural dispersal. Recent work has indicated that the number of naturally colonizing species is increasing. Many current methods for predicting invasive species’ impact are not immediately translatable to natural colonists, because these methods rely on evidence from previously invaded regions and/or long-time series. Despite this concern, this project remains aware that some natural colonists may have a case for conservation in their own right due to decline in their historic range.

I will investigate the potential implications of arriving natural colonists for UK biodiversity, from an interdisciplinary perspective. The majority of the project will use cutting edge modelling techniques to investigate the potential ranges, spread and ecological impacts of a broad suite of natural colonists for contrast with known invasives. However I will also attempt to explore stakeholder and public perceptions of these taxa, through a portfolio of methods from the social sciences.

Together, this thesis aims to synthesize the current risks and opportunities of natural colonists for UK biodiversity. The programme of work will improve the monitoring of non-native species regardless of their origin; increase awareness among UK Biological recorders and ultimately the results will form a pioneering case-study to inform the management of range-shifting species around the world.

Project Description:
There are some 1800 species living in the UK that originate from elsewhere and have been introduced by humans. Some of these non-native species are classed as “invasive”, meaning they cause ruinous damage to ecosystems and/or threaten native species. However, another kind of non-native species has emerged: species that are colonising the UK without human assistance (“natural colonists”), often because climate change is creating suitable habitat for these species in the UK. Incidences of “natural” colonisation are on the rise as climate change progresses. It is increasingly suspected that some natural colonists might pose a serious threat to UK biodiversity and ecosystems. However, there is a major problem with evaluating this suspicion. Invasive impacts are assessed based on a species having high abundance across a large area, causing obvious declines in native species or ecosystem services (both of which usually require the species to have been resident in the UK for a long time), and/or being a known threat elsewhere (which requires the species to have been introduced elsewhere). Recent natural colonists have not been resident in the UK for a long time, and are rarely introduced elsewhere, so the risk they pose is un-investigated.

The studentship will perform a comparative study of the impact of natural colonists and human-introduced non-natives, based on techniques that detect early-warning signals of invasive impacts. The aim is to improve the monitoring of non-native species regardless of their origin, and if warranted for any natural colonist species to create a species alert and monitoring scheme for that species.