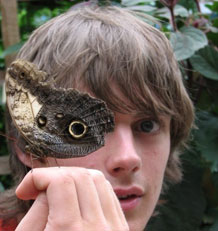 My background is in field ecology and science communication, having previously worked as a bird surveyor, badger surveyor and college science technician. I began to specialise in ecological subject areas shortly into my BSc degree in Zoology, and have also become interested in the role behavioural studies can play in conservation research. Ringing and nest recording I find very enjoyable and these open the door to studying avian demography in fine detail. My study species are birds including the herring gull, and currently the cuckoo and its host on Dartmoor, the meadow pipit.

Project Description:
The cuckoo Cuculus canorus is generally a declining species in the UK and across Europe, but with very different population trends on agricultural land compared to semi-natural habitats, and in England compared to Scotland. Research into the species’ diet and habitat requirements for conservation is lacking; its low population density, wary nature, long-distance migration and unusual brood-parasitic strategy of reproduction create barriers to conventional field research. The current project aims to study diet and habitat sensitivities through a variety of established and novel means, in order to try and understand the role of land-use in driving cuckoo population dynamics.

The common cuckoo Cuculus canorus has undergone a striking divergence in population trend between UK habitats since the 1980s. The breeding population in Scotland – in largely semi-natural open habitat – shows significant increase whereas there has been a significant decline in England. Here breeding numbers have remained stable or increased in semi-natural habitats, while woodland and farmland populations have plummeted. As a brood parasitic bird with a long-distance annual migration, the cuckoo has a unique network of relationships to songbird ‘hosts’, prey and habitat; and a disconnection between adult and nestling ecology due to lack of parental care. This thesis investigated the role of breeding ground land-use factors in driving cuckoo population decline. In the first chapter information was synthesised from the literature on potential threats and environmental impacts facing cuckoo populations, which also highlighted knowledge gaps and a basis for hypotheses in later chapters. In chapters 3 and 4 I investigated land-use and habitat influences on the nestling ecology of the cuckoo and a key host the meadow pipit Anthus pratensis at field sites in Dartmoor, Devon, UK. I assessed provisioning behaviour at unparasitised nests of meadow pipit, and used this baseline to test how host provisioning differed between host broods and cuckoo nestlings and fledglings, as indicators of how resource requirements differ between cuckoo and host in a relative stronghold habitat. There was evidence that host foraging habitat selection and investment in provisioning per unit time were similar between raising a cuckoo nestling and a host brood; but the nestling and fledgling periods were longer in cuckoos and the rate of provisioning was higher for cuckoo fledglings. Pipits also provided cuckoos with different diversity and frequency of prey taxa, further indicating that cuckoo nesting success requires different resources to that of unparasitised nests. In chapters 5 and 6 I focused on the diet of adult and juvenile cuckoos. In the first application of DNA sequencing to the study of cuckoo diet, adults in a relative stronghold habitat consumed large moth caterpillars (Lepidoptera) but frequently consumed Orthoptera and some Diptera families not previously reported as important prey. Analysis of moth capture data in Devon suggested some key prey species have declined even in semi-natural upland areas. I conclude with analysis of key findings including how they direct future research and conservation.
Abstract.  Full text.