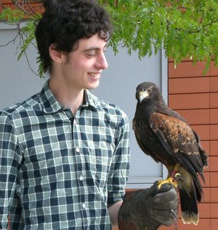 I am currently researching the ecology and evolution of marine microbial systems, in particular the interactions and coevolution of bacteria and their viruses (aka. phage). I am interested about how local interactions and mechanisms can lead to global patterns. I use mathematical and computational tools guided by ecological principles to guide my work with the Earth System Science group. Before coming to Exeter I investigated the role of pheromone signalling for foraging pharaoh‘s ants (monomorium pharaonis), which utilise attractive and repellent pheromones. I also had an intern placement working with the Computational Science group at Microsoft Research on leaf longevity models in defining global leaf phenology biogeographic patterns. For more details about my research:

The need to understand the role and functioning of microbial communities is becoming increasingly important in both environmental and industrial contexts as the potential to study them through physical and computational methods has improved. Microbial communities are the most abundant and diverse biological replicators on Earth. Particularly understanding the coevolution of PBIN's (phage bacterial interaction networks) could provide useful information for studying phage therapy or marine carbon cycling. Using a combination of dynamical models and network theory I hope to investigate how PBIN's coevolve in an ecological and evolutionary framework.