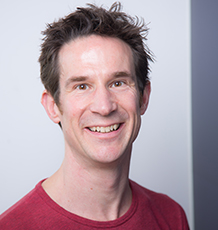 Academia provides amazing freedom to choose unconventional hours, work anywhere in the world, and communicate with collaborators across the globe. So if I am not in my office, please feel free to send me an email (S.Simpson@exeter.ac.uk) to arrange a meeting or Skype (sdsimpson).

I am a marine biologist and fish ecologist, with particular interests in the behaviour of coral reef fishes, bioacoustics, effects of climate change on marine ecosystems, fisheries, conservation and management. I lead a dynamic research group of ~10 postdocs, PhD and Masters students. Following a NERC Knowledge Exchange Fellowship I have ongoing links with industry and policy on the themes of European Fisheries and Climate Change, and Anthropogenic Noise and Marine Ecosystems. I work closely with Cefas and the Met Office, am an active member of the IQOE Science Committee, and have been an Academic Advisor and featured scientist in Blue Planet 2.

My work combines fieldwork, often through expeditions to remote and challenging environments around the world, with laboratory-based behaviour experiments, data-mining, and computer modelling.

My research focuses on:

My recent TEDx 2019 Talk: Changing the Soundtrack of the Ocean

Short films on my research and knowledge exchange activities

Impact Case Studies from my Research

My first degree was in Marine Biology at the University of Liverpool (BSc Hons, 1998), during which I worked in Mozambique assessing the Quirimba Archipelago for Marine Protected Area status. Inspired by my time in the tropics, I followed this with a Masters degree at the University of York in Marine & Coastal Ecology & Environmental Management (MRes, 1999) where, under the guidance of Profs Rupert Ormond and Callum Roberts, I completed an Internship in the British Virgin Islands designing fisheries management tools for the developing world. I then spent a year working with the Australian Institute of Marine Science (AIMS) in Western Australia, Raleigh International in Belize and with a UK environmental consultancy (CMACS). I completed my PhD (2000–2004) at the University of York supervised by Dr Calvin Dytham and Dr Mark Meekan (AIMS), focusing on the influence of behaviour of larval coral reef fish on dispersal and implications for population connectivity. I continued this line of study, combining field studies, electrophysiology, choice experiments and individual-based modelling, with a NERC Postdoctoral Research Fellowship which I held at the University of Edinburgh (2004–2008, working with Prof Victoria Braithwaite). I moved to Bristol in 2008 to work with Dr Martin Genner on the effects of climate change on European fish communities and implications for effective fisheries and conservation management under the NERC Sustainable Marine Bioresources theme. In parallel I developed some strong collaborations to study impacts of marine anthropogenic noise (shipping, pile-driving, drilling, etc.), and was Co-Investigator on a major Defra-funded project with Prof Andy Radford (Bristol). I also held a NERC Knowledge Exchange Fellow (2011–2014) which enabled me to develop strong links between the research community and industry and policy on the themes of European Fisheries and Climate Change, and Anthropogenic Noise and Marine Ecosystems. I joined the University of Exeter as a Senior Lecturer in Marine Biology and Global Change in Sept 2012, where I now have a thriving research group working on effects of climate change on European fisheries, and impacts of anthropogenic noise on marine ecosystems.

2015 – Runner up for Pew Fellowship in Marine Conservation

I was the lead author for UK Parliament 2013 Marine Climate Change Impacts Partnership (MCCIP) report on climate change and fish, and co-author of 2017 MCCIP Report on Impacts of Climte Change on Fisheries

I was a NERC Knowledge Exchange Fellow (Cabot Institute Fellows Page / Blog), so alongside my research I develped lasting collaborations with research end-users (aka the real world), including policy makers, marine industries, fisheries scientists and conservation groups. I have a diverse range of partners, including Defra, the International Council for the Exploration of the Seas, the IUCN, the UK Underwater Sound Forum, the fishing industry, the offshore renewable energy sector and the Institute of Marine Engineering Science and Technology, with whom I organise workshops, develop policy documents and policy briefings and build science-industry links to ensure the science we produce is of real value to society.

I am committed to developing a sustainable, productive, prosperous, and aesthetically inspiring marine environment from which future generations can draw economic benefit and enjoyment in equal measures.

I have reviewed for >15 funding agencies, >50 journals and >5 books and examined >15 postgraduate theses.

My research has been widely covered by:

Additional Grants with my students, postdocs and collaborators

I have convened symposia at international conferences, including:

I have organised conferences and workshops, including

I have a diverse range of previous teaching experience: