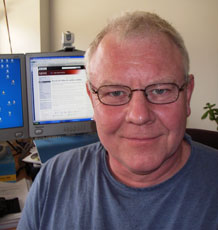 Paul set up the Greenpeace Research Laboratories at London's Queen Mary College in 1987. He has continued as the principal scientist since the group relocated to the University of Exeter in 1992.

He obtained a PhD on selenium toxicity in aquatic invertebrates, from the University of London, in 1984. Paul now has over 30 years experience in providing scientific advice and expertise to Greenpeace International and national/regional offices around the world, on a diversity of issues.