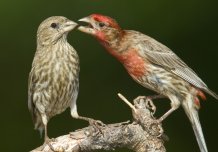 A study of a songbird and a bacterium that infects it has revealed how species in conflict evolve in response to each other.

This process – known as “host-pathogen coevolution” – is believed to play a key role in evolution, but until now evidence for it has been scarce.

“Our results show how these competitors respond to each other over time,” said Dr Camille Bonneaud, of the Centre for Ecology and Conservation on the University of Exeter’s Penryn Campus in Cornwall.

“As the finches evolve better resistance to the pathogen, the pathogen becomes more potent to overcome these defences.

“It is widely assumed that animals – including humans – coevolve with their infectious pathogens and become ever more resistant, but in fact most direct evidence for this comes from studies of bacteria and their viral pathogens.

“In this study we show how a pathogen can shape evolution in a vertebrate and how this has consequences for the pathogen.”

The research, supported by universities in Alabama (Auburn University) and Arizona (Arizona State University), was made possible by differences in finch populations in these two US states.

Researchers found that exposure to the pathogen led to eye swelling in birds from both states, but that resistant Alabama birds were three times less likely to show symptoms that would lead to death in the wild.

Similarly, the pathogen evolved to become better able to infect and transmit as the birds became more resistant.

The findings have implications for our knowledge of diseases that affect humans.

Dr Bonneaud explained: “The Plague and more recently the pandemic of HIV are sobering reminders of the impacts that emerging infectious diseases can have on us.

“We know that we can see the signature of such impacts on our genome.

“This study provides a direct demonstration that these outbreaks can shape our evolution and that how we respond will, in turn, shape the evolution of our infectious pathogens.”

The paper, published in the journal Current Biology, is entitled: “Rapid antagonistic coevolution in an emerging pathogen and its vertebrate host.”