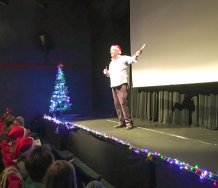 Professor Brendan Godley at a previous Science of Christmas

Christmas dinner is an international evolutionary feast – with only the humble carrot native to British soil, a leading scientist says.

Global trade and domestication over thousands of years account for everything else, from turkey and bacon to potatoes and parsnips.

Professor Dave Hodgson, of the University of Exeter, will explain the origins of Britain’s favourite festive foods at the Science of Christmas, a family-friendly event in Falmouth on Thursday (6 December).

Other talks will include “Why can’t Rudolph find his carrots?” and “Is Santa naughty or nice?”

Professor Hodgson said: “Of all the animals and plants that appear on the traditional Christmas dinner plate – turkey, bacon, cabbage, Brussels sprouts, broccoli, cauliflower, swede, parsnip, carrot, potato, chestnut, cranberry – only the carrot is a British native, and the carrot we eat bears almost no resemblance to its wild ancestor.

“Turkeys are from America, pigs are from Turkey, potatoes from Peru and our cabbages are from the Mediterranean.

“All of our food species have been bred to be edible, large, colourful and very different from their wild ancestors.

Also at the Science of Christmas:

The Science of Christmas is on Thursday at 7pm at the Poly in Church Street, Falmouth.

The event is currently full. To join the waiting list in case of any cancellations, visit http://ex.ac.uk/thescienceofchristmas2018

The speakers, from the University of Exeter’s Penryn Campus, promise to uncover some of the intriguing scientific secrets of Christmas without spoiling the magic.