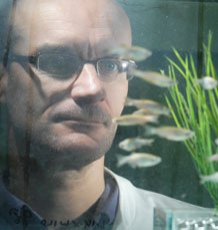 Costing the Earth: fertility declines in humans and wildlife

Popular BBC Radio 4 show ‘Costing the Earth’ interviewed Professor Charles Tyler of the University of Exeter to shed light on the causes and consequences of documented fertility declines in both humans and wildlife.

The episode addresses what is arguably one of the most concerning social and environmental issues of recent times; a marked decline in fertility. In the west, human sperm concentration has declined by 50% in the last 40 years, with one in six couples struggling to conceive in the UK. Presenter Jheni Osman draws parallels between the reality of the fertility issue and the dystopian world created in the popular fictional drama ‘The Handmaids Tale’ where pollution causes sterility in humans. The issue has additionally become a cause for environmental concern following declines in the fertility of wildlife.

Endocrine disruptors are a class of chemical which interfere with the hormone system. Prolonged exposure to these chemicals has been identified as one of the major causes of reproductive disruption in humans and wildlife. Endocrine disruptors are present in make-up, plasticisers in food packaging, pesticides and pharmaceuticals, and thus regular and prolonged exposure is somewhat unavoidable. When these chemicals reach the environment, for example via waste water treatment systems, wildlife becomes additionally vulnerable.

Professor Tyler’s research focusses on the effects of exposure to endocrine disruptors in wildlife. In the programme, he discusses the role of environmental oestrogens in causing widespread feminisation of fish in UK rivers. Professor Tyler said: 'Studies on wildlife help us to both understand our impacts on natural systems as well as provide barometers on how those activities may well be affecting our own health both directly and indirectly. Our studies have helped to illustrate that chemicals which affect hormone systems in fish can affect sexual development and fertility and increasingly this is being seen to occur in all sorts of other vertebrate systems, including man. Endocrine disruption has drawn the scientific communities’ attention to the need to better understand the more subtle effects of chemicals, beyond overt toxicity, as these effects can in fact have long term health consequences'.

The programme aired on the 25th September and is currently available on BBC iPlayer.