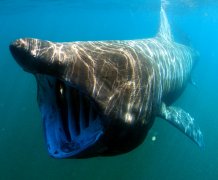 Basking sharks are the second-largest fish in the world

Scientists seeking to discover whether Scotland’s seas are a mating ground for basking sharks have filmed new footage showing the sharks being sociable, including a first look at groups forming on the seabed.

These data have been gathered by Scottish Natural Heritage (SNH) and the University of Exeter as part of a new camera tagging project launched earlier this month.

Basking sharks are the second-largest fish in the world, reaching lengths up to 10m. Despite their size and prevalence in Scotland’s seas, little is understood about their social behaviours.

“A large number of sharks appear each year just off the western coast of Scotland in the Sea of the Hebrides. However, there’s been limited research to show exactly what they’re doing here: do they come solely to feed on plankton, or are they courting each other and using our coast as a mating ground?” said Dr Suzanne Henderson, Policy and Advice Officer at SNH.

Researchers from SNH and the University of Exeter spent a week off the coast of Tobermory tagging three basking sharks using towed camera tags, which trail slightly behind the attachment point at the base of the main dorsal fin.

It is believed this type of tag has never before been used on basking sharks. The video footage collected by the tags will give scientists a new understanding of basking shark group behaviour.

Dr Henderson continued: “There’s very little information about social and mating behaviours in basking sharks, or indeed sharks in general. We’ve been unsure whether the surface behaviours we see in the Sea of the Hebrides – such as parallel swimming, following nose to tail, or swimming in tight circles – are courtship activities.”

Dr Matthew Witt, from the University of Exeter, said: “The footage we’ve collected gives a fantastic shark’s eye view of the environment and new insight into behaviours.

“We can see sharks very closely aggregating near the seabed, potentially forming social groups. Three sharks are seen very close together, fins touching but hardly swimming. We haven’t seen basking sharks exhibit this behaviour at depth, and early in the morning, before.”

“The basking shark is a protected species in Scotland, across the UK and in the coastal and offshore waters of many northeast Atlantic countries,” said Dr Lucy Hawkes, also from the University of Exeter.

“But as yet we don’t know how human activity might inadvertently affect their behaviour, including mating, and as such this project offers an exciting opportunity to look more deeply into the lives of these large planktivorous sharks.

“It’s also possible that future footage we collect will record basking sharks mating. To our knowledge this would be the first recording of these fish mating.”

Data collected by the camera tags will also help inform future consultation processes around designating a Marine Protected Area by identifying why the area is important to the sharks. The researchers hope to return to Tobermory next year to obtain more footage.

Minister for Rural Affairs and the Natural Environment, Mairi Gougeon said: “The study being undertaken by Scottish Natural Heritage and the University of Exeter is an exciting opportunity to build our knowledge of how basking sharks use our seas.

“In addition to being a world first for the use of these towed camera tags on this species, this work will enhance the evidence base for a basking shark Marine Protected Area proposal which will be consulted on later this year.”

SNH and the University of Exeter have been collaborating on basking shark research since 2012. This new research follows a satellite tagging project (2012-16) which showed for the first time that individual sharks return to the same areas off Scotland’s coasts in consecutive summers.