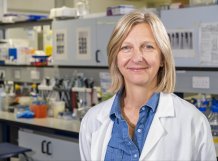 4,000 tons of microbeads no longer released into ocean after pioneering plastics research

Leading British microplastics researcher, Professor Tamara Galloway, has been shortlisted for a Natural Environment Research Council (NERC) Impact Award to honour the substantial benefit her work has provided for society.

Professor Galloway from Exeter University, and her team of colleagues at the University of Plymouth and Plymouth Marine Laboratory, started looking into the effect that tiny pieces of plastic could be having on marine life in 2004 at a time when other experts remained sceptical. The team predicted that microplastics, from sources like larger plastic pollution and microfibers from clothing, would be widespread in the ocean and the marine food chain - and went on to prove it.

Now widely regarded as top of her field, the research has had a lasting impact on laws, such as supporting the UK microbeads ban that came into force this year meaning that 4,000 tons of microbeads per year are no longer being released into the marine environment. The research has helped to raise awareness about the pervasive issue of microplastics among the public and the academic community, including advising on the seminal BBC series Blue Planet II.

Tamara and her colleagues are now investigating how we can make the plastic economy more sustainable by closing the production to waste loop so that used plastic is recycled back to the source and none escapes out to sea as pollution.

The 2018 Impact Awards celebrate NERC-funded scientists, as individuals or teams, whose work has had a big impact on the economy or society in the UK or internationally. Professor Galloway and her team are shortlisted in the Societal Impact category. The winners will be announced at ceremony at the Natural History Museum on Monday, December 3.

NERC’s Associate Director of Research Ned Garnett said: “A decade ago, the world ‘microplastics’ was a little used term and interest in their effects on the ocean environment was limited even among researchers.  Now, the problem of our discarded plastics being broken down and polluting the ocean is well-known. Professor Galloway and her team have been instrumental to shedding light on the harmful effects of microplastics in the ocean, and their NERC-funded work has directly influenced legislation to help tackle this.  We are proud to recognise this achievement in the 2018 NERC Impact Awards shortlist.”

Professor Sir Steve Smith, Vice-Chancellor of the University of Exeter said: “I am absolutely delighted that Tamara has been shortlisted for this prestigious award. The world-leading research carried out by Tamara, and her team of colleagues, has made a crucial difference in our understanding of how detrimental microplastic pollution is to the environment.

“Her work, in the lab and also in the public sphere, has seen public awareness, and as a result action, drastically build in a short space of time. It has also been a crucial driver in the recent ban of the use of microplastics in cosmetics, which is a remarkable achievement. More widely, it is also playing a significant role in challenging us all to think about how we use plastic in our everyday lives, and find ways to reduce its use. The shortlisting for the NERC Impact Award is richly deserved, and we congratulate Tamara on her success.”

Professor Tamara Galloway said: “We all have to make choices about how we use plastics, and it isn’t always easy to do the right thing. Plastics are in such a huge range of products – from mascara to coffee cups – that it can feel impossible to make a difference, but we can. The passion that drives my research is that I want to protect the environment.  I want to protect it for my children, and for future generations.

“The research that we submitted for the NERC Impact Award has shown that microplastics are present in the oceans and in a wide array of marine creatures where they can have a harmful effect. In some of our early papers we were able to show that marine mussels do in fact ingest plastic with their food.  We used special florescent techniques to show that once eaten those tiny pieces of plastic could be taken up, across the gut, meaning that when the mussels are eaten by larger predators, the plastic could be passed up through the marine food chain, ultimately ending in us.

“It is vitally important that we tackle the issue by preventing plastic waste from accumulating in the environment. We need to make the supply chain circular rather than the current linear model, which means usefully re-using the plastic products we make. We need to find alternative materials that can be produced cheaply and, crucially, don’t break down into particles or chemicals that can cause harm to the environment.

“The public interest globally in plastic pollution has grown phenomenally since the microbeads ban. We are really hoping we can use all of that publicity in a really positive way, and drive some change to use materials that are safer by design, so that we get all the benefits of plastic, but we don’t waste so much of it by throwing it away needlessly into the marine environment.”