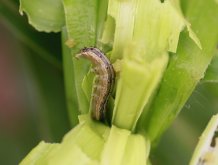 Fall armyworm will continue to spread

A devastating crop pest called the fall armyworm – discovered this week in India – will continue to spread, a researcher says.

On Monday the Indian Council of Agricultural Research confirmed the species had been found in several locations in the southern state of Karnataka.

Dr Regan Early, of the University of Exeter, said conditions in south-east India were “just right” to allow the moth to spread further – and she warned it would reach China and much of south-east Asia.

It is not clear whether the fall armyworm will come to Europe, but Dr Early said this is possible and authorities should be prepared.

The species is native to North and South America, but has destroyed vast quantities of maize and other crops since being discovered in Africa in 2016.

“The fall armyworm caterpillar is known to eat at least 186 plant species – including many key food and cash crops,” said Dr Early, of the Centre for Ecology and Conservation on Exeter’s Penryn Campus in Cornwall.

“It probably arrived in India via busy trade and passenger links with parts of Africa, and unfortunately there is no way to stop it spreading now.

“The moths can fly up to 300km per night and the species quickly develops resistance to pesticides and genetically modified crops.”

Dr Early has been working with scientists from the Centre for Agriculture and Biosciences International (CABI), who today warned of major crop losses unless urgent action is taken.

“CABI had already developed and implemented a response action plan to tackle fall armyworm in Africa, which could be an excellent model to replicate and control the pest in India.

“CABI is ready to assist its national partners in India to manage and control fall armyworm.”

Dr Roger Day, CABI’s Programme Executive for Action on Invasives, added: “This is disappointing news but not a surprise, as our previous work has shown the pest was likely to spread beyond Africa into other parts of the world.

“CABI and the University of Exeter have been forecasting the global extent of the fall armyworm invasion for a new piece of upcoming research.

“Based on this work, I think we can expect to see this pest spread rapidly in India and to other countries in many parts of Asia.”

In an evidence note funded by the UK’s Department for International Development (DFID), CABI estimated this pest could cost just 12 of Africa’s major maize-producing economies a total of 2.5bn-6.2bn US dollars a year in lost maize harvests, if left unmanaged.

Since 2017, CABI has been implementing recommendations included in the evidence note.

The organisation’s experts have given farmers advice on the identification and control of the pest through Plantwise plant clinics running in the affected countries.