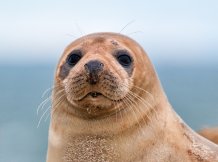 Microplastics can pass up the food chain to top predators

Microplastics can transfer up the food chain from fish to top predators, such as seals, reveals new research  by Plymouth Marine Laboratory (PML), University of Exeter and the Cornish Seal Sanctuary.

Microplastics are a widespread pollutant of the marine environment that can be inadvertently consumed by zooplankton, fish and even larger filter-feeders, such as whales.

Now, for the first time, scientists have shown that microplastics within fish can transfer to marine predators at the top of the food chain.

Researchers analysed scat (faeces) from captive grey seals (Halichoerus grypus) and the digestive tracts of the wild-caught Atlantic mackerel (Scomber scombrus) the seals were fed upon.

One third of the mackerel and half of the scat samples contained microplastics, a finding that demonstrates a process known as trophic transfer, whereby prey containing microplastics are consumed by predators and the synthetic particles move up the food web as a result.

This process has previously been observed in animals lower down the food chain, such as mussels and crabs, but this study is the first to provide evidence of it occurring in marine mammals.

Practical issues often encountered by wild studies, such as contamination and difficulty differentiating between directly and indirectly ingested microplastics, were overcome by observing captive seals.

Lead author Sarah Nelms, of PML’s Microplastics Research Group and the University of Exeter, said: "Our finding that microplastics can be passed from fish to marine top predators is something we’ve long thought was the case but, until now, lacked the evidence to back our theory up.

"We have shown that trophic transfer is an indirect, yet potentially major, route of microplastic ingestion for these predators.

"By examining scat from captive animals and the digestive tracts of fish they were fed upon, we could eliminate the possibility that the seals were eating plastic directly and be sure that any microplastics we found in their scat came via the fish."

Dr Pennie Lindeque, lead of PML’s microplastics research, added: "Our study demonstrates how microplastics can be transferred from prey to predator and therefore passed up through the food chain.

"More work is needed to understand the extent to which microplastics are ingested by wild animals and what impacts they may have upon the animals and ecosystems."

Professor Brendan Godley, of the Centre for Ecology and Conservation on the University of Exeter’s Penryn Campus, said: "The world is awakening to the gravity of the plastic problem and the possible negative impacts of microplastics in the marine environment.

"We are pleased to be helping to build the framework of evidence that will allow is to understand how and where these impacts may be felt by marine life."