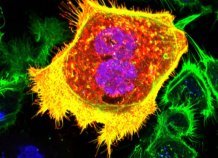 A novel, self-governed transport system for Wnt cell signalling proteins has been discovered by Benjamin Mattes and Dr Steffen Scholpp at the University of Exeter.

Wnt signalling proteins are vital for biochemical cellular communication processes during development; however the transport mechanism by which they are transferred between cells was previously not fully understood.This new research identifies a specific mode of transportation which could provide a foundation for developing methods of Wnt signal mediation to aid in combatting human diseases.

The maintenance of a healthy state requires an on-going conversation between the cells which comprise our bodies in order to mediate cellular proliferation, differentiation and migration. Cells communicate via biochemical signals such as Wnt proteins, an important signal factor family which have particularly significant roles during development. Wnt proteins are produced by certain cell groups within a tissue, and received by their neighbours, which respond to the signal.

Traditionally, scientists ascribed Wnt transportation to a model of random diffusion of signalling molecules from the sender to the receiver cell. However, recent work by the Scholpp group has exposed a precise delivery method of finger-like membrane protrusions, on the tip of which sits the Wnt protein, which stretch from the sender cell to the membrane of the receiver cell. This method allows for ultimate control over which cells receive the signal, the concentration of Wnt received, and the exact timing of delivery and receipt – but how are these cellular protrusions formed?

This most recent publication, in collaboration with Duke Medical School, Singapore; the Karlsruhe Institute of Technology, Germany and Cardiff University, uses pioneering research to reveal that Wnt retains sovereignty; the cellular protrusions which deliver Wnt proteins are themselves governed by Wnt, which interacts with a specific receptor tyrosine kinase (Ror2), and activates formation of the protrusion. The group has found that the greater the number of cellular protrusions, also known as cytonemes, the greater the number of Wnt proteins found in a particular tissue.

The revelation of this cytoneme-based transport system for Wnt provides fundamental new information about cell-based Wnt communication. The Scholpp group postulates that cytonemes form a communication grid in a tissue with an end-to-end principal for precise collecting, disseminating, and managing information. They envisage that the work will provide a basis for the development of methods to mediate Wnt signalling in order to combat human disease, be that during development, wound healing or regenerative processes.