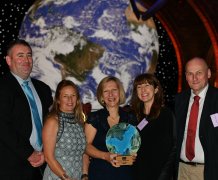 The winning team at the 2018 NERC Impact Awards

A team of pioneering researchers from across the South West has won two prestigious awards for the impact of work highlighting the presence, and potential impacts, of microplastics in our oceans and the marine life they contain.

The accolades recognise their efforts to bring the causes and effects of plastic pollution, and in particular microplastics, to the attention of policy makers, industry and the general public globally.

In an excellent example of collaborative research, the three institutes brought together a wealth of expertise, experience and facilities to investigate the global challenge of microplastics in the ocean.

Professor Thompson was the first to coin the term microplastics in a seminal research paper published in Science in 2004, and subsequent NERC-funded research by the team has directly influenced policy in the UK and the world. This includes the UK’s ban on microbeads in cosmetics, which came into force in January 2018, while members of the team have also advised on influential TV documentaries such as Blue Planet II and Drowning in Plastic.

Professor Sir Steve Smith, Vice-Chancellor of the University of Exeter, said: “I am absolutely delighted that the pivotal research carried out by the collaborative team from Exeter, the University of Plymouth and Plymouth Marine Laboratory, have secured this prestigious award. It is testament to the crucial impact his world-class research, conducted by Tamara and the team of colleagues, has made in developing the global understanding of how detrimental microplastic pollution is to the environment. As well as being a crucial driver in the recent ban of the use of microplastics in cosmetics, it has also playing a significant role in challenging us all to think about how we use plastic in our everyday lives, and find ways to reduce its use. This award is richly deserved, and we congratulate Tamara and the whole team on their success.”

Professor Judith Petts CBE, Vice-Chancellor of the University of Plymouth, said: “Richard Thompson is a genuine pioneer of marine science, and this award is just recognition of the efforts he –with colleagues at the University of Exeter and Plymouth Marine Laboratory – has made to bring microplastics to the national consciousness. These types of local and global collaborations are inspiring people to think and behave differently and influencing policy makers worldwide. Richard began working in this field at a time when no-one else was doing so, and the high profile international campaigns we see today are in no small part due to his research. He is one of the University’s outstanding global ambassadors and we continue to be proud of his work to achieve lasting societal and environmental change.”

Professor Stephen de Mora, Chief Executive of PML, said: “We are absolutely delighted to be part of the winning team for the Societal Impact Award.  That the team has also won the Overall Impact Award is incredible, and testament to the ground-breaking and societally relevant research undertaken by our scientists, led by Dr Penelope Lindeque, and those at the Universities of Exeter and Plymouth, who together bring wide-ranging expertise to address a global problem.  These awards truly demonstrate the strength in depth in the region in microplastics research.”

Shortlisted and judged by independent panels of esteemed academic, industry and government figures, the awards celebrate NERC-funded scientists whose work has had a significant, wide-reaching impact on the economy or society in the UK or internationally.

This year's judges include former UK Environment Secretary Lord Deben, Chairman of the Committee on Climate Change, and BBC presenter and Professor of Public Engagement in Science Professor Alice Roberts, with the winners announced during a ceremony at the Natural History Museum.

Dr Phil Heads, NERC’s Director of Research and Innovation, said: “Microplastics research from the University of Exeter, the University of Plymouth, and the Plymouth Marine Laboratory, was chosen as the winner of the Societal Impact category and the overall winner of the NERC Impact Awards in recognition of the global reach and tremendous significance of the impact. Their work has captured phenomenal public interest and led to action all over the world by Governments, businesses and citizens. It demonstrates clearly the important role that environmental scientists have to play in providing evidence for action to protect the health of our people and the planet. It is in no small part thanks to these scientists, supported by NERC and others, that our perceptions about the use of disposable plastics in our everyday lives have undergone a seismic shift.”

Energy and Clean Growth Minister Claire Perry said: “Be it revealing the harmful effects of microplastics, exploring the biodiversity of our oceans, or charting the devastating effects of palm oil on deforestation, UK research teams have been instrumental in exposing environmental damage. In doing so they influence policy and behavioural change across the globe. It is all of our responsibility to leave the natural world in a better state than we found it. The winners of the Impact Awards set us on the right course to achieve this, and through our modern Industrial Strategy, we will ensure the UK can play a key role in delivering on this in the future, while seizing the opportunities of a cleaner greener economy.”

UK Research and Innovation chief Executive Professor Sir Mark Walport, who presented the Early Career Impact Award, said: “Deforestation, climate change and microplastic pollution of our oceans are issues that will be used by future generations to define our age. Tackling these issues requires global action. The NERC Impact Awards recognise the determined, passionate teams who are delivering world-leading UK research and ensuring it can support the solutions we need to overcome these challenges.”