Milk in parts of Ukraine has radioactivity levels up to five times over the country’s official safe limit, new research shows.

Scientists from the Greenpeace Research Laboratories at the University of Exeter and the Ukrainian Institute of Agricultural Radiology sampled cow’s milk from private farms and homes in the Rivne region, about 200km from the site of the Chernobyl Nuclear Power Plant explosion in 1986.

They found levels of radioactive caesium in milk above Ukraine’s safe limit for adults of 100 Becquerel per litre (Bq/L) at six of 14 settlements studied, and above the children’s limit of 40 Bq/L at eight sites.

The highest levels found were about 500 Bq/L – five times over the limit for adults and more than 12 times that for children.

“More than 30 years after the Chernobyl disaster, people are still routinely exposed to radioactive caesium when consuming locally produced staple foods, including milk, in Chernobyl-affected areas of Ukraine,” said Dr Iryna Labunska, of Greenpeace Research Laboratories at the University of Exeter.

“Many people in the area we studied keep cows for milk, and children are the main consumers of that milk. 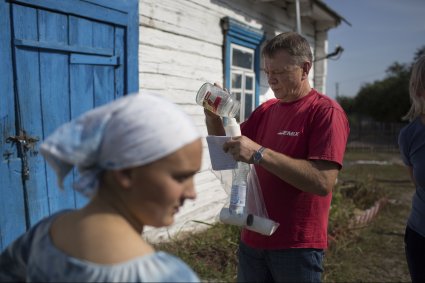 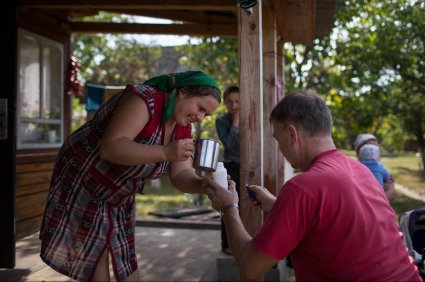 “Though the level of soil contamination in the studied areas is not extremely high, radioactive caesium continues to accumulate in milk and other foods, such that the residents of these villages are chronically exposed to radioactivity that presents health risks to almost every system in the body – especially among children.”

The researchers say that some simple protective measures could be taken to bring radiation exposure levels below limits at a cost of less than 10 euros per person per year for the 8,300 people living in the six villages with the highest contamination.

Such measures include applying a caesium binder, called Ferrocyn, to cows, mineral fertilisation of potato fields and feeding pigs with uncontaminated fodder.

The cost of this would decrease each year as radiation levels fall – but if no action is taken, the experts warn that milk contamination will continue to exceed the 100 Bq/L adult limit in parts of Ukraine until at least 2040.

“The Ukrainian government has taken some of these measures in the past, but that stopped in 2009,” Dr Labunska said.

“Government and international monitoring needs to take place, along with help for people affected by this radiation.

“This situation should also act as a warning and a reminder of just how long the legacy of nuclear accidents can be.

“Without adequate countermeasures, what may now seem a purely historical event will remain a daily reality for those communities most impacted.”

The paper, published in the journal Environment International, is entitled: “Current radiological situation in areas of Ukraine contaminated by the Chernobyl accident: Part 1. Human dietary exposure to Caesium-137 and possible mitigation measures.”