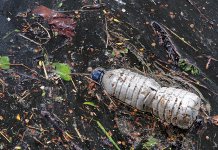 The team estimates there may be 12.5-125 trillion particles of plastic in the world’s oceans

Are we underestimating microplastics in the marine environment?

A new study suggests an underestimation of microplastics in the ocean.

By using finer 100μm (0.1mm) sampling nets rather than customary 333μm (0.333mm) or 500μm (0.5mm) coarser sampling nets, the team – led by Plymouth Marine Laboratory and including the University of Exeter – have built a picture of the extent to which microplastics in coastal waters have been underestimated.

The findings show that sampling using 100μm mesh nets resulted in the collection of 2.5- and 10-fold greater microplastic concentration respectively compared with the 333μm and 500μm meshes.

Extrapolation of the data suggests that by using a 1μm mesh, microplastic concentrations could exceed 3700 microplastics per cubic metre.

Global estimates of floating microplastic debris modelled on data primarily gathered from 333μm net samples are in the order of 5-50 trillion particles.

Through this study, the team estimates that the global plastic budget may actually be in the order of 12.5-125 trillion particles, based on the relationship between microplastic concentrations identified with the 100 and 333μm nets.

The team, which also involved King’s College London and the Rozalia Project, further identified that using the finer nets resulted in the collection of significantly thinner and shorter microplastic fibres.

Previous exposure studies have highlighted the negative impacts microplastics can have on marine organisms, such as shellfish, plankton and fish, with these negative effects including reduced feeding, fertility, growth and survival, as well as altered behaviour and ecological function.

By establishing a more accurate estimate of microplastic concentration in the ocean, scientists will be able to predict better the likely risks that microplastics pose to marine life, biodiversity, ecosystem services and productivity, which in turn, will help inform monitoring efforts and provides a clearer benchmark to judge the effectiveness of management scenarios.

Professor Pennie Lindeque, lead author of this study and Head of marine Ecology and Biodiversity at Plymouth Marine Laboratory, said: “Microplastics aren’t a uniform type of pollutant, rather they come in all different shapes, sizes and polymer types; determining how many of which types are in the natural environment is rather like looking for needles in a haystack.

“Our results, based on sampling in the UK and US, suggests we are underestimating the really small pieces of plastic in the marine environment. Using a power law extrapolation we suggest microplastic concentrations could exceed 3700 microplastics m3, that’s far more than the number of say zooplankton you would find in a meter cubed of water.

“A better understanding of how many microplastics are in our seas and a more detailed description of what type of microplastics they are, helps to determine what risk they pose to marine animals and ecosystems, which in turn can help influence societal behaviour and drive future policy intervention.”

Dr Ceri Lewis, of the Global Systems Institute at the University of Exeter, said: “Understanding more about the smaller microplastics present in the ocean is important as it is these smaller particles that are more likely to be ingested by the small marine animals, the zooplankton, that form the basis of marine food webs.

“Getting to work with the Rozalia Project on their wonderful yacht off the coast of Maine provided us with a really exciting opportunity to look at this question in a beautiful part of the world, but finding so many microplastics in our samples whilst surrounded by whales and dolphins was not so great.”

Dr Matthew Cole, co-lead author of this study and Marine Ecologist and Ecotoxicologist at Plymouth Marine Laboratory, added: "Microplastic pollution is a widespread pollutant, found all throughout the oceans, but working out how much is there has been a major challenge for scientists.

“Typically, scientists use specialised nets to sieve out microplastics from the sea surface.

“Normally these nets are quite coarse so they don't get clogged up with microscopic plants and animals that live in the sea, but it also means they're unable to sieve out the very smallest plastics that are present.”

Dr Rachel Coppock, author on this study and Marine Ecologist at Plymouth Marine Laboratory, said: "There is often a mismatch between the number and type of microplastics used in experimental studies and those found in the natural environment.

Rachael Z. Miller, contributor to the study and founder of the Rozalia Project, said: "Increasing the accuracy of estimates on microplastic concentration enables the development and guides the scale and placement of solutions where they are most likely to have the most impact. That is what this paper has done. Everyone at Rozalia Project and the crew on American Promise thoroughly enjoyed working with this team of top notch researchers and is proud to have played a role in this important work.”

The paper, published in the journal Environmental Pollution, is entitled: “Are we underestimating microplastic abundance in the marine environment? A comparison of microplastic capture with nets of different mesh-size.”