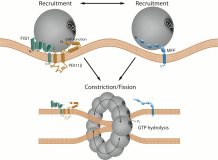 Working model of PEX11β-FIS1-dependent and MFF-dependent peroxisome division. The fission GTPase DRP1 is shown in grey

New research gives insights into how organelles divide in cells

A pioneering study has shed new light on how subcellular organelles divide and multiply.

The study, led by Professor Michael Schrader from the University of Exeter, has explored on peroxisome dynamics and revealed alternative pathways for their division.

Organelles are the functional units of a cell. They perform specialised functions, and defects in their enzymes performing those functions can result in metabolic disorders.

However, organelles are also highly dynamic, allowing them to multiply by increasing in size and then dividing to adapt their number and functions to changing cellular needs.

Recently, scientists have identified a new group of disorders, characterised by defects in the membrane dynamics and division of organelles rather than by loss of metabolic functions.

Patients with defects in organelle division present with developmental and neurological abnormalities.

MFF functions as an adaptor protein to recruit a mechanochemical enzyme, Dynamin-related protein 1 (DRP1), to mitochondria and peroxisomes.

This enzyme can constrict and divide membranes and is essential for membrane fission and organelle multiplication.

It was therefore assumed that MFF is the key factor in peroxisome division.

An international, multi-disciplinary team of scientists, led by Professor Schrader, has now revealed an alternative pathway for their division.

Peroxisomes fulfil important protective functions in the cell and are vital for health; they contribute to cellular lipid metabolism and redox balance, which links them to the control of energy regulation, cellular ageing and age-related disorders.

“In this study, we show that the peroxisomal membrane protein PEX11β can divide the highly elongated, fission-incompetent peroxisomes in MFF-deficient cells, when the PEX11β levels are increased," said Professor Schrader.

"However, PEX11β does not have the ability of divide peroxisomes on its own.

"It requires FIS1 (Fission factor 1), another membrane adaptor for DRP1, whose exact role was previously unclear."

Tina Schrader, first author of the paper and senior research technician in the team, said: “Interestingly, we observed that increased levels of MFF can also divide peroxisomes in PEX11β-deficient cells and restore a normal peroxisome morphology."

“We show that alternative pathways for peroxisome division exist; one using MFF and DRP1, and another using PEX11β, FIS1 and DRP1”, said Dr Ruth Carmichael, joint first author of the paper.

Professor Michael Schrader pointed out that: “Our observations suggest that modulation of MFF or PEX11β protein levels may represent a therapeutic option to overcome the defects in peroxisome dynamics.

"Pharmacological agents that up-regulate MFF or PEX11β may therefore be of therapeutic value to restore peroxisome dynamics in certain disease conditions.

“This might also be relevant to age-related conditions like dementia, deafness and blindness, as peroxisomal dynamics are known to have important protective functions within sensory cells.”

People with severe peroxisomal disorders, also known as Zellweger Spectrum Disorders, often die as children or young adults, and the team cooperates with a charity called Zellweger UK to raise awareness and to support families and sufferers.

The research was supported by the Biotechnology and Biological Sciences Research Council.