These are the words of Idrus, a firefighting coordinator from CIMTROP at the University of Palangka Raya, who is working on the frontline tackling Indonesia’s forest fires. He is not alone, though he might be forgiven for feeling that way.

Millions of people in Indonesia have been living under a blanket of smoke. For two months, we have hardly seen the sky. I’m a British researcher – here to study the effects of previous wildfires on orangutans. The sky here looks like when it's about to snow in the UK; dark and thick.

Why? Because countless wildfires are burning all over Indonesian Borneo and Sumatra. 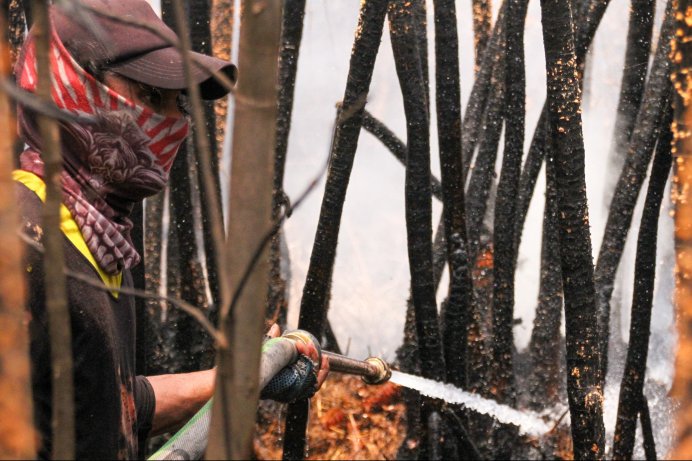 The issue is complex with multiple possible causes. Indonesia has a strong tradition of slash-and-burn agriculture, due to the cost-effectiveness and speed at which land can be cleared to grow crops. Slash-and-burn is 20 times cheaper than using machinery. What’s more, local fishermen have a history of burning areas surrounding rivers to improve fishing opportunities. Often, these initially small-scale fires get out of hand and develop into serious problems.

Large-scale, industrial activities are also responsible for fires in Indonesia. Oil palm and Acacia plantation owners use the method of burning to clear land, and activities such as logging and agriculture have disturbed the natural state of tropical peatlands, making them more susceptible to fire.

The wider costs are huge. I’m in Palangka Raya, a city in one of the worst-affected regions of Indonesia. It has been a very unhealthy place to be. We've experienced an air quality index of over 2000 – anything over 150 is considered unhealthy. I can smell the smoke in the air constantly and always have to wear a mask when going outside.

Many local people don’t wear masks. They carry on as usual. The schools were shut for about two weeks, but have now reopened as the air quality has improved a little over the last few days. The sad thing is, this happens every year – though it’s not always this bad – so local people often seem to accept it as normal. It should definitely not be normal.

Many people have respiratory illnesses and the hospitals are full with people needing oxygen. There isn’t enough to go around. At a pharmacy, I saw a lady ask for a small oxygen cylinder. She was told they had run out, and so had all of the pharmacies in the city until they could receive the next delivery.

Indonesia is affected by fires every year, but 2019 has brought a particularly damaging fire season – and it’s not over yet. According to the Indonesian National Disaster Agency, more than 320,000 hectares – an area twice the size of Greater London – have burned already. During August and September, there were more than 260,000 fire hotspots in Sumatra and Kalimantan (Indonesian Borneo) which have wreaked havoc on public health, the economy and the environment.

Of course, this is the story for many equatorial countries. But what makes Indonesia interesting is the kindling beneath the flames. Asia contains approximately 38% of the world’s tropical peatlands, with Indonesia being the major contributor. Much of these naturally flooded peatlands have been drained for agriculture, or drained by the construction of canals to export timber from forests. Drained, dry peat soils are highly flammable, burning below ground as well as above, which makes fires extremely difficult to extinguish. Therefore, reckless land burning, peatland drainage and drought conditions are the fuelling factors turning Indonesia into a tinder box. 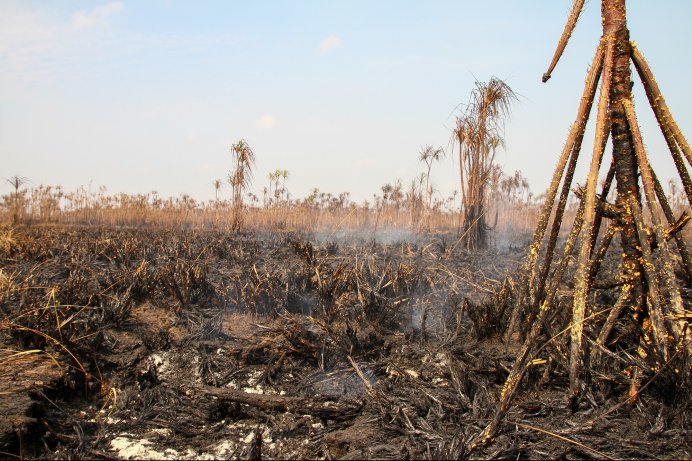 Most people know the importance of tropical rainforests such as the Amazon in providing oxygen and storing carbon, but peatlands are the unsung heroes of climate regulation. Covering just 3% of the Earth’s land surface, peatlands store between 32-46% of the world’s soil carbon pool. Indonesian peatlands are rich areas that need protecting. However, they are currently one of the most exploited ecosystems on Earth.

Peatlands are also rich in biodiversity. A total 1,524 plant species, 123 mammals, 268 birds, 75 reptiles, 27 amphibians and 219 freshwater fish have been recorded in South-East Asian peat swamp forests. Many of these species are already highly threatened and spiralling towards extinction. Every year, forest fires consume more and more vital habitat.

Some slower-moving animals such as turtles, snakes and frogs are unable to escape the flames and burn alive. Others, including the birds and mammals, may be fortunate to escape the immediate danger but subsequently suffer from starvation and respiratory diseases caused by the smoke. It is highly likely that species such as orangutans and gibbons will suffer from the same respiratory problems that humans experience when chronically exposed to smoke pollution.

So, what is being done?

There will be no quick fix for extinguishing the flames in Indonesia. How do you police land burning in remote, rural areas? How can a fire that may burn underground and undetected be extinguished effectively? Brave firefighters work tirelessly, day and night to dowse the flames and their efforts should not go unnoticed by legislators and the wider world. In the short term, they need more funds for firefighting efforts to minimise the damage.

Long-term solutions must come from better law enforcement on burning land in vulnerable areas during the dry season to reduce fires, and a focus on peatland restoration. Rewetting the peat by damming drainage canals, reforesting and revitalising livelihoods to more sustainable activities will better protect peatlands from future fire events.

The firefighters I spoke to, including Idrus, are exhausted and many of them are suffering the effects of smoke inhalation. They wanted to go on anyway. After two months on the front line, Idrus said he was still ready to get up and go each morning. The day after we spoke, another huge fire began. 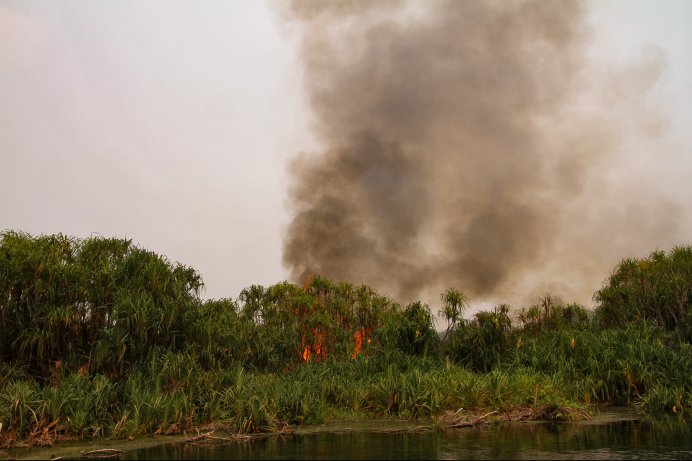