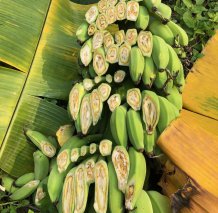 Researchers at the Department of Biosciences, University of Exeter studied the temperature preferences and host plant diversity of hundreds of fungi and oomycetes that attack our crops.

The researchers found that plant pathogens can specialise on particular temperatures or host plants, or have wide temperature or host ranges.

Tom Chaloner, an SWBIO DTP PhD student, said: “We have collated the largest dataset on plant pathogen temperature responses, and made this available for the scientific community.

“Our data allow us to test some of the most fundamental questions in ecology and evolution.

“For example, we found that temperature preferences are narrower when pathogens are growing within plants, demonstrating the difference between the so-called fundamental niche and the realised niche.”

The researchers used recently-developed statistical methods to investigate the co-evolution between pathogens and their hosts, showing that pathogens can readily evolve to attack new host plants.

“In an era of growing global population size, climate change and emerging threats to crop production and food security, our findings will be key to understanding where and when pathogens could strike next,” said co-author Professor Sarah Gurr.

The dataset produced by the study, funded by the Biotechnology and Biological Sciences Research Council (BBSRC), has been deposited in the open access Data Dryad repository and can be freely accessed by other researchers for further analysis (doi:10.5061/dryad.tqjq2bvw6).

The paper, published in the journal Nature Communications, is entitled: “Geometry and evolution of the ecological niche in plant-associated microbes.”