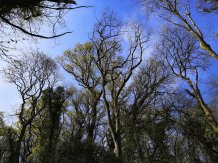 But selecting trees with lower levels of these compounds and breeding for resistance could leave the UK ash tree population open to attack from invading insect pests in the future, the study warns.

Researchers from the universities of Warwick and Exeter looked at the abundance and diversity of secoiridoid glycosides in the leaves of a panel of ash trees known to be resistant and samples from trees known to be susceptible to ADB from both Denmark and the UK.

In the paper, entitled "Diversity of secoiridoid glycosides in leaves of UK and Danish ash provide new insight for ash dieback management", researchers have identified particular secoiridoid glycoside compounds that could potentially be used as biomarkers for tolerance or susceptibly to ADB.

Lead author Dr John Sidda, from the School of Life Sciences at Warwick, said: “Ash dieback is an enormous problem for the UK, as ash makes up 5.5% of British woodlands.

"It is the third most abundant tree species in the UK, with numbers exceeding 100 million trees.

"Ash dieback could be devastating to the British landscape and it is estimated it could cost the UK economy up to £15 billion.

"Currently there is no treatment for the disease so it is vital we understand all the possible pathways to developing resistance.

“Our work shows that the small molecules in leaves could give a pretty reliable indication of a tree’s resistance as well as new insight into possible resistance mechanisms.

"Work is already underway to validate our results on a much larger panel of UK trees, and to identify other compounds that contribute to ash dieback resistance.”

"It also demonstrates why it is important to understand the molecular mechanisms of disease resistance before embarking on a course action to address the disease."

If potential ADB tolerant ash could be identified via a rapid test, they could be selected for breeding to begin repopulating the UK countryside.

However, there may be another enemy on the horizon.

The Emerald Ash Borer (EAB) beetle is an insect pest of ash which has devastated the ash tree population in North America.

The pest is moving towards Europe and has already been identified in Russia and Ukraine.

At the current rate of spread it will reach central Europe in 15-20 years.

Dr Sidda said: “We know that secoiridoid glycosides play a number of roles in plants, and some of these compounds act as a defence mechanism against herbivorous insect pests.

"In selecting trees with lower levels of these compounds in order to help protect the ash population against ADB, we may run the risk of reducing the UK’s ash trees’ natural defence against the EAB.

“However, our results indicate that there may be higher concentrations of secoiridoid glycosides in UK ash compared to Danish ash, so UK trees might be better protected against future herbivore threats such as EAB.

"There is also much more structural diversity of secoiridoid glycosides in the UK and Danish trees than we first thought.

“Researching and understanding these chemical compounds further will help us plan for protecting the UK ash population over the next few decades.”

Professor Murray Grant, Elizabeth Creak Chair in Food Security at the University of Warwick and report co-author said: “These results are exciting as they reveal an unexpected diversity in this class of chemical compounds between ADB susceptible and tolerant UK trees, and also between Danish and UK ash. These may act as a potential reservoir of protective compounds that contribute to tree health.

“Our ongoing research is focussed on better understanding the biology of these compounds. We are grateful to funding from UKRI that allows us to expand this study to identify other chemical markers that discriminate tolerant and susceptible trees with the goal of developing a screen for ADB tolerant ash.”

The project was funded by BBSRC.