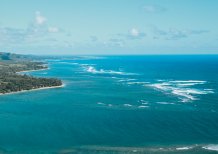 Researchers have recorded a video of their message to G7 leaders: https://youtu.be/R90AwHZ7WwY

G7 ministers must 'listen to the science'

G7 ministers meeting this week must "listen to the science" and protect the world's ocean, according to researchers and conversation organisations.

Climate and environment ministers of the G7 (UK, USA, Canada, Japan, Germany, France and Italy, plus the EU) begin a two-day virtual meeting tomorrow (Thursday) before G7 leaders meet in Cornwall in June.

A coalition of marine experts, including University of Exeter researchers and more than 70 conservation groups, say this is a vital opportunity to protect the ocean.

In a letter to G7 minsters, they write: "We need global leaders to take ocean action to protect our planet’s life support system."

Professor Callum Roberts, of the University of Exeter, said humanity's impact on the ocean now stretched "to the deepest abyss and the farthest reaches of the open sea".

"While there are encouraging glimmers here and there of recoveries of depleted wildlife and degraded habitats, we are still losing the battles to arrest and reverse biodiversity loss and bring climate change under control," he said.

"Neither effort can succeed without a bold ocean recovery plan.

"We call on G7 nations to lead in a global effort to fully protect 30% of the sea by 2030, and bring the rest under much-improved management.

"Such an effort is vital to safeguard and augment ocean stores of carbon, thereby mitigating climate change, and at the same time restore to health ecosystems that are critical to human wellbeing everywhere."

Many of the groups signing the letter are members of the OneOcean Flotilla, a collective of marine organisations aligning to highlight the importance of the ocean in making our planet habitable.

OneOcean representative Mirella von Lindenfels said: “We cannot tackle climate change, find balance with nature or reverse the decline in biodiversity if we do not protect the ocean.

"The G7 leaders need to recognise this and reflect it across all their decision making; they have to listen to the science.

"We hope that their environment ministers will start this process by prioritising the ocean within the summit agenda.”

Professor Heather Koldewey, of ZSL (the Zoological Society of London) and the University of Exeter, said: "Our science and conservation work across the world demonstrates the scale of the challenges facing our ocean, but also provides clear, evidence-based solutions.

"We know that inclusive, locally-led initiatives can effectively protect and restore the ocean.

"However, we need political leadership and support to take these to a scale that enables recovery of the blue planet on which we all depend.

Professor Brendan Godley, who leads the Exeter Marine group, added: "We are proud to stand together with the global marine conservation community to call for greater protection of the ocean and all of the vital services it provides.

"While we constantly strive to underpin this agenda with our research and education, here we add our voice in the hope that the ministers and leaders will take the evidence on board and #ListentotheOcean."

The researchers have recorded a video of their message to G7 leaders: https://youtu.be/R90AwHZ7WwY

To find out more about Exeter's marine research, visit: https://greenfutures.exeter.ac.uk/