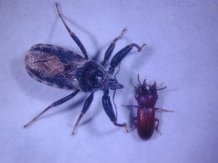 Natural selection can reverse evolution that occurs through sexual selection and this can lead to better females, new research shows.

The study – led by the University of Exeter and Okayama University – examined broad-horned flour beetles, whose males have exaggerated mandibles, while females do not.

Male beetles with the largest mandibles win more fights and mate with more females – an example of "sexual selection", where certain characteristics (like a male peacock's tail) improve mating success.

Experimentally enhanced natural selection through predation, however, targets the same males favoured by sexual selection and this results in the evolution of less masculinised bodies and better-quality females.

In the study, broad-horned flour beetles were exposed to a predator called the assassin bug, which ate males with the largest mandibles.

By removing these males, predation effectively reduced the benefits of sexual selection and this means natural selection has an increased impact.

After eight generations of this, females produced about 20% more offspring across their lifespan, compared to a control group of beetles where large-horned males were not removed by predation.

"Males and females of every species share genes, but in some cases – including broad-horned flour beetles – the genes good for one sex aren't always ideal for the other," said Professor David Hosken, of the University of Exeter.

"We see this process, known as intralocus sexual conflict, across the natural world.

"Optimal hips for women would be broad enough to allow childbirth, while optimal hip width for men is narrower.

"Humans reach a sort of evolutionary compromise, in which neither males nor females get the body shape that would be optimal for them."

"This study helps us understand two evolutionary tug of wars, one between natural and sexual selection and the other that takes place over body shape and characteristics shared between the sexes."

Funding for the study came from the Leverhulme Trust and the Japan Society for the Promotion of Science.

The paper, published in the journal Nature Communications, is entitled: "Natural selection increases female fitness by reversing the exaggeration of a male sexually selected trait."