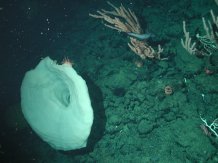 Deep-sea mining in international waters could begin in two years – but researchers say this is unnecessary and could cause irreversible damage to marine ecosystems.

Writing in the journal Frontiers in Marine Science, researchers from the University of Exeter, Greenpeace Research Laboratories and Globelaw challenge the need for deep seabed mining and highlight the risks to ecosystems and biodiversity that would arise from commercial mining activities.

No commercial-scale deep seabed mining is currently allowed to take place outside the exclusive economic zones (EEZs) of coastal nations.

The International Seabed Authority (ISA) is drafting regulations that would allow such extraction of deep-sea minerals to begin.

Last month, the so-called "two-year rule" was triggered by the Pacific island of Nauru, which is working with The Metals Company, a minerals mining and processing firm headquartered in Canada, for approval to begin mining.

The ISA now has two years to finalise regulations or face an application for mining without agreed rules in place.

"Seabed mining is sometimes presented as an unavoidable consequence of ever-growing demand for minerals, especially to supply certain metals for the green technology transition," said Dr Kirsten Thompson, of the University of Exeter.

"This narrative is put forward by mining companies, who also present deep-sea mining as the ‘lesser of two evils’ in comparison to land-based mining, but it’s impossible to compare the inherent value of land and deep-sea ecosystems.

The researchers argue that there are alternatives to opening up the deep seabed for mining, including better design and sustainability of technology to enable far better use of the minerals that humanity has already extracted from the Earth.

"It's vital to bust the myth that we have no choice but to permit commercial mining in the deep sea," said Dr Thompson.

Taking the example of electric vehicles, the researchers highlight three studies that estimate the minerals that will be needed by the electric vehicle industry – and the estimates vary widely, depending on their underlying models and assumptions.

Kathryn Miller, of Greenpeace Research Laboratories, said: "Deep-sea ecosystems cover vast areas of our planet but we know very little about them.

"What we do know is that the deep sea is home to a variety of highly specialised, slow-growing species, and that the seabed plays an important part in storing carbon.

"We don't fully understand the carbon-burial process, so disturbing the seabed is a risk both to biodiversity and in terms of climate change mitigation."

The paper also says that exploitation of deep-sea minerals would probably benefit "a handful of corporations in the world’s richest countries", rather than the wider global community and future generations.

It proposes a "Rights of Nature" management framework, where a group including scientists, communities and other interested parties would be created to oversee guardianship of the ocean.

Dr Thompson added: "We mine our oceans at our peril."

The new article is entitled: "Challenging the need for deep seabed mining from the perspective of metal demand, biodiversity, ecosystems services and benefit sharing."

The research team has published previous papers warning that deep-sea mining could destroy ecosystems, and that a “gold rush” of seabed mining could lead to unprecedented damage.

The University of Exeter has launched a ‘Green Futures’ campaign and website to drive action on the environment and climate emergency. To find out more please visit https://greenfutures.exeter.ac.uk.