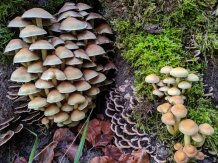 The study warns that many decades of experimental work have left us with a skewed understanding of the effects of nitrogen pollution, and this could hamper responses to global change.

Professor Dan Bebber, from the University of Exeter's Global Systems Institute, writing in the journal Science of the Total Environment, says scientific experiments have been “unrealistic”. They often involve simulations of nitrogen deposition far higher than those experienced even in heavily polluted regions, in fact they are similar to mineral fertilizer applications in agriculture.

Professor Bebber said: “Despite decades of research, past experiments can tell us little about how the biosphere has responded to anthropogenic nitrogen deposition. A new approach is required to improve our understanding of this important phenomenon.”

In most experiments scientists have used more than 100 kg N ha-1 y-1 to model the impact of nitrogen, while global average land surface deposition rates are around 1 kg N ha-1 y-1 and only exceed 10 kg N ha-1 y-1 in certain regions, primarily in industrialized areas of Europe and Asia and particularly in forests. Many species are highly sensitive to nitrogen, and react very differently to these lower levels than to unrealistic experimental levels.

In his analysis, Professor Bebber calls for future experiments to be designed to take into account how much nitrogen pollution is found in different ecosystems and regions, and for researchers to monitor the impact of nitrogen pollution for longer periods to detect cumulative effects. Research should also examine the relationship between the concentration of nitrogen released and the environmental response.

Professor Bebber said: “Understanding the impacts of anthropogenic nitrogen has been a major goal of global change research, through observational and experimental studies. However, there remains a wide gulf between global nitrogen deposition rates, and the experimental treatments applied to simulate them.

“Where the purpose of an experiment is to understand the effects of agricultural fertilizers, then high levels of N application rates are justified. Researchers employing more realistic nitrogen treatments have questioned the validity of rates far exceeding current or predicted N deposition levels. The responses of organisms and ecosystems to enhanced N availability can be subtle and non-linear.”