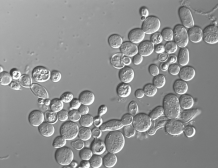 New research from the University of Exeter reports the largest ever whole-genome sequencing project for the potentially fatal yeast infection Candida glabrata from hospitals across Scotland.

Candida glabrata is a type of yeast that can cause disease in humans. It most commonly affects the urinary tract, genitals, mouth, and the bloodstream. If it is not caught, these infections can become deadly.  It also has a very high resistance to certain antifungal drugs, so understanding why resistance occurs is key to knowing how to treat it effectively.

The new research, published in Genetics, used samples from eight hospitals in Scotland to sequence the genome of Candida glabrata. This led to the discovery of a variety of new information on the species. This includes information on how they reproduce and the genetic diversity. It also found that genes that make it more likely to be infectious have an advantage for survival, and the drug-resistance genes often evolve within patients.

The discovery of this information gives scientists an advantage when it comes to treating candida glabrata. A better understanding of the genes involved allows researchers to focus their work in ways that were not possible before. It also helps aid understanding on how the pathogen spreads, which is important to identifying infections.

Dr Rhys Farrer, one of the Principal Investigators at the MRC Centre for Medical Mycology at the University of Exeter, said: “Our study sheds new light on the genetic diversity of Candida glabrata. We have demonstrated that this deadly human fungal pathogen is being spread between continents, probably by humans, and recombining to form new populations, which is likely contributing to its high virulence and increasing drug resistance."

The research was funded by the Medical Research Council and the Wellcome Trust.