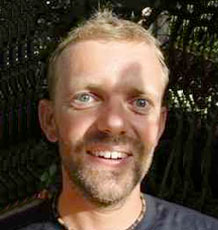 I initiated my career in Western Australia 1997, establishing an NGO to undertake coral reef habitat mapping projects and identify areas worthy of additional protection within the Ningaloo Marine Park. Subsequently this lead to work in Kuwait where I spent four years in the development of a large public aquarium facility providing the opportunity to work hands on with corals and marine vertebrates learning aspects of animal husbandry, fish pathology and turtle rehabilitation. Continued work in Kuwait after 2003 lead to my introduction into consultancy world where I worked on the design and maintenance of oceanographic data-buoy networks and also participated in UN fisheries stock assessment projects.

Having first visited Oman in 2001 to assist with marine mammal research, I sailed my home and belongings there in 2007, and since been stationed there focusing on marine conservation projects working through a local environmental consultancy. Aside from projects with commercial clients, much of this work has included developing capacity and scientific methodology with government and local NGO’s in Oman to enable long-term monitoring of sensitive habitats and endangered species as a means to support development of evidence based conservation programmes.

As well as the dive time spent mapping and monitoring coral reefs, many seasons have also been spent trekking and training teams on remote beaches of Oman’s coastline monitoring olive Ridley, hawksbill, green and loggerhead nesting populations. My involvement in the marine mammal research in Oman has also continued as part of an international team of collaborating scientists. Most importantly, research conducted up until 2008 resulted in the IUCN recognizing humpback whales (Megaptera novaeangliae) found in the region as being non-migratory and perhaps one of the most endangered populations of whales in the world. As a result of the drive to understand more about the ecology for the ‘Arabian Sea Humpback Whale’ much of my recent time has been spent managing vessel transect, passive acoustic and remote telemetry studies to ensure sufficient information is generated to guide effective management for this isolated and endangered sub-population.

The project focuses on describing the spatial ecology of humpback whales found in Oman and the wider Northern Indian Ocean as a means to addressing where habitat utilization by this isolated and endangered sub-population will be at odds with emerging threats.

Historical whaling and recent vessel based sightings data will be used to describe ecology and generate habitat models, and these will be further refined and informed by data acquired from a new satellite telemetry study conducted in Oman. Once this initial stage is completed, vulnerability mapping will be conducted through overlaying elements of the habitat use data against human activities of potentially conflicting interest, including; ports and shipping, fishing, and oil and gas exploration. Products of the study are expected to feed into resource management plans and help direct the operations of coastal and offshore industrial activities.

Humpback whales (Megaptera novaeangliae) are a circumglobal species, and as capital breeders demonstrate migratory movements between high and low latitude waters in the northern and southern hemisphere. Arabian Sea humpback whales (ASHWs) are understood to be the only population of this species that is non-migratory residing annually in low latitude tropical waters, a characteristic that makes their spatial ecology unique. Interest in the presence of humpback whales in the Arabian Sea was stimulated in the mid-90s by revelations of illegal Soviet whaling that took place in the north Indian Ocean during the mid-1960’s. Dedicated field studies began off the coast of Oman in 2000, and during the course of these studies it was revealed that the population was small, (N= 82 individuals, CI 95% 60-111), and that it is vulnerable to threats from human activities at sea throughout its range. Defining the spatial relationship between threats and ASHW distribution has been identified as a management priority by member states of the International Whaling Commission and Convention on Migratory Species. However, much of our knowledge on the spatial ecology of ASHWs has been limited within the range of small vessel surveys and discrete localised sampling from passive acoustic monitoring units that identify the presence of whales through detection of song.

This thesis begins with a literature review of ASHW scientific literature with an emphasis on aspects relating to the spatial ecology of the population (Chapter 1). The analytical focus of the thesis presents results of satellite telemetry studies conducted on 14 ASHWs successfully instrumented with Argos enabled satellite tags between February 2014 and November 2017. Animal movement modelling and home range analysis revealed movements of 13 individuals predominantly along the continental shelf of the Arabian Sea coast of Oman, and the return migratory movement of a single female between the Gulf of Masirah (Oman) and Gulf of Mannar (southern coast of India). Dive profiles revealed by satellite tags measuring depth (n=11) demonstrated that individuals spent the majority of their time (82%) at less than 20m depth, a trait that exposes them to threats including shipping and fisheries. Evaluation of vertical and horizontal space use also revealed movements associated with localised deep diving and transiting along the continental slope off the coast of Oman (Chapter 2). The broad-scale distribution of ASHWs was modelled along the coast of Oman, eastern Iran and using satellite telemetry location data and remotely sensed environmental data within an ensemble ecological niche modelling (EENM) framework. The described distribution also supports the hypothesis for an important but yet unstudied part of the ASHW range in the north east Arabian Sea (Chapter 3). The high risk to whales from ship strike along the Arabian Sea coast of Oman is revealed through pairing of EENM mapping products with satellite based Automatic Identification System (s-AIS) ship tacking data. We demonstrate that ship strike risk reduction can be achieved through vessel re-routing measures, and that these would need to be addressed through International Maritime Organisation procedures for their implementation to become a reality (Chapter 4). The thesis concludes with an overview of how the insights gained from the presented studies has evolved our understanding of the spatial ecology of ASHWs and how the results can be applied to mitigate threats. Recent studies also document that 66% of ASHWs have had interaction with fishing gear. We consider that exposure to fishing and shipping related threats in the areas defined by this study is a concern given that potential biological removal (PBR) parameters indicate the population may only sustain a loss of one animal every two years to anthropogenic causes. As such we advocate for timely use of our findings to initially investigate and address threats to the population in the most important areas of habitat that we identify (Chapter 5).
Abstract.  Full text.
Andrew_Willson Details from cache as at 2021-09-19 16:21:01