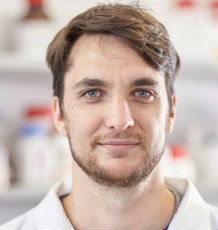 After obtaining a degree in Environmental Biology at Plymouth University, I worked as a research assistant at the Ecotoxicology Research & Innovation Centre (ERIC; part of Professor Richard Handy's lab), Plymouth University, where I developed my use of basic microscopy while imaging zebrafish.

Subsequently, I undertook my PhD research (within Professor Teresa Fernandes's and Professor Theodore B Henry's labs) at Heriot-Watt University, Edinburgh, where I studied the fate and bioavailability of silver nanomaterials within freshwater systems (AgNM).

Then I worked as a research fellow at Exeter University (within Professor Tamara Galloway's and Professor Charles Tyler's labs), where I led research investigating the interaction and transfer of nanoplastics within a simple food web. During this project, I extensively applied fluorescence and confocal imaging, image quantitation and processing techniques.

My academic background is in Nano-Ecotoxicology. I previously worked with Zebrafish and Stickleback fish as a model for over five years. My work was mainly done in academic research facilities, primarily at Plymouth University (2012), then Heriot-Watt University (2013-2016) and Exeter University (2016-2019).

Historically my research experience  focused on the exposure and bioavailability of silver nanomaterials (AgNM) in freshwater environments (AgNM). More recently, at Exeter, I led research that addressed the interaction and transfer of nanoplastics within a simple freshwater food web. During my research posts, I have extensively applied wide-field fluorescence and confocal imaging, image quantitation and processing and analysis techniques. Since February 2020, I have been leading the support of the light microscopy applications of Exeter’s Bioimaging Centre.

Currently, I have ongoing collaborations with (among others) :

This is just to list a few - always looking for new collaborations if my expertise are requested/needed on a project - Happy to discuss.

I am interested in finding effective ways to teach advanced light microscopy methods:

I also contribute to: