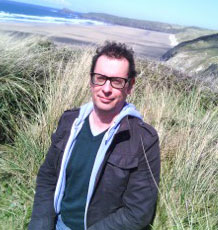 Dan is the Project Manager for Tevi.  He leads a team across IIB and three Colleges, as well as staff within our external delivery partners, Tevi (www.tevi.co.uk) engages enterprises throughout Cornwall and the Isles of Scilly to maximise economic benefiit from the circular economy and contribute to environmental gain.

Dan has been at theuniversity in a number of roles for ten years. He has led international strategic partnerships within meteorology and human health, and has worked as a researcher and impact fellow in nature-based interventions for metal wellbeing.

Dan came to the south west in 2000, leaving a role as the Mayor of London's sustainability advisor. Before that he worked for a number of  environmental charities across Europe and the UK.

In Devon he worked for the old EU Objective 2 programme, then as an economic devleopment consultant in the private sector for Roger Tym and Partners.

He has also worked for Natural England in Cornwall, EUROPARC Atlantic Isles, and as a psychotherapist in private practice.