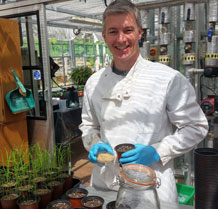 Graham is a Post-Doctoral Research Fellow in the lab of Ryan Ames. He is a molecular biologist employing functional genomics to investigate host-pathogen interactions in the field of food security. The Ames group are trying to identify new target genes involved in disease progression of the rice blast fungi Magnaporthe oryzae. To achieve this, they are combining new computational methods to analyse gene expression throughout the infection cycle and compare data between multiple fungal isolates. The role new candidate genes play in pathology is determined by gene-deletion and assessing the resulting effects on virulence. The intended outcome of this work is to identify potential new targets for next-generation antifungals.

Graham did his Ph.D. on Nosemosis, a fungal disease of bees in the lab of the late Professor Ken Haynes, where he stayed on and switched focus to phytopathology, working on functional genomics, characterising germination and early infection of wheat by the fungus Zymoseptoria tritici.