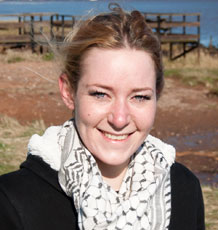 I started my Biology career at the Radboud University of Nijmegen in the Netherland in 2005. After two years I moved up to the north coast of the Netherlands to specialise in Marine Biology at the State University of Groningen (RuG) in 2007. I completed my BSc in Biology in 2008 and my MSc in Marine Biology in 2010. During my Masters I fulfilled two independent research projects, each of which lasted 7 months. For the first project I investigated the hybridisation and toxicity in Fibrocapsa japonica strains at the RuG. My second project took place in Townsville, Australia, at the Australian Institute of Marine Science. For this project I assessed the extent of self-recruitment in the T. gigas populations of the Great Barrier Reef by exploiting a large number of closely related adults, using a genetic approach with self-developed microsatellite markers.

In September 2012 I joined Tamara Galloway’s group at University of Exeter. My PhD focuses on nuclear receptors in the bivalve species, Crassostrea gigas (Pacific oyster), and their potential for ecotoxicological disruption. During my PhD I also had the opportunity to work with Prof Taisen Iguchi and his workgroup at the National Institute for Basic Biology in Okazaki, Japan.

My main research interests are marine ecotoxicology and molecular biology with a strong focus on invertebrate species, which make up a great majority of all macroscopic life in the ocean. Research on marine invertebrates is of particular relevance as many invertebrate species have the potential to serve as reliable model organisms when investigating anthropological effects.

Project Description:
Molluscs represent the second largest phylum among the invertebrates and are characteristic features of aquatic and terestrial habits world-wide. Molluscan species are under enormous risk from xenobiotic compounds in the environment through antropogenic pollution resulting in e.g. imposex, malformation and mass mortality, but little is known of the molecular mechanisms underlying these effects.

Nuclear receptors are a superfamily of transcription factors important in key biological, developmental and reproductive processes. Several of these receptors are ligand- activated and through their ability to bind endogenous and exogenous ligands, are potentially vulnerable to xenobiotics.

My project investigates the presence, expression and biological function of nuclear receptors in the Pacific oysters (Crassostrea gigas) and the potential for them to bind xenobiotics. Understanding how putative vulnerable nuclear receptors function and how they can be disrupted by xenobiotics will provide us with the required knowledge on how to enhance protection of the marine environment and everything that is living in and from it.