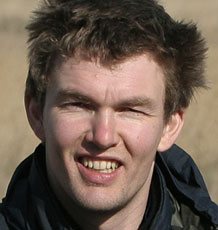 I am interested in a wide variety of evolutionary and ecological questions. During my PhD I studied the mating decisions between two flycatchers species (the collared and pied flycatchers) using a variety of different approaches. My current research is directed towards understanding signal use in sexual selection and speciation.

Song as a dual-function signal in crickets
In crickets, earlier studies showed that song is both used in male-male competition and female choice. In a series of lab experiments I will investigate how song is used in both sexual selection contexts and what information the signals conveys. The information content of a signal is very important; for example a male might want to signal its fighting capabilities to an opponent, but its paternal qualities to a prospecting female. A key question is whether or not this can be achieved with a ‘single’ signal.