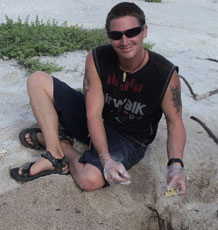 I spent my early years working as a tree surgeon in which I managed my own business and undertook both contract and private work. I still maintain this business as a primary source of funding to support my career in conservation biology.

I started as a conservation biologist in 2002 and since this time I have worked and studied a broad range of taxa including brydes whales Balaenoptera edeni, common dolphins Delphinus delphis, orca Orcinus orca, griffon vultures Gyps fulvus and baw baw frogs Philoria frosti. However, my main specialty is working with marine turtles in which I have five seasons of experience on the Greek island of Zakynthos with ARCHELON - The Sea Turtle Protection Society of Greece, in addition to seasons in Costa Rica (Sea Turtle Conservancy), Cape Verde (SoS Tartarugas) and the Cook Islands (Cook Islands Turtle Project, a subsidiary project of the Pacific Islands Conservation Initiative).

I have worked with four species of marine turtle including greens Chelonia mydas, loggerheads Caretta caretta, hawksbills Eretmochelys imbricata and leatherbacks Dermochelys coriacea. I have extensive experience in all aspects of monitoring; conducting both marine and nesting beach surveys including night patrols to encounter nesting females. In addition to monitoring, I have also been involved in large scale public awareness campaigns and environmental education within schools. During my last position as the Administrator and Science Officer of the Cook Islands Turtle Project, I devised a sea turtle education module which is to be taught nationally.

Project Title: The variation in life-history strategies of marine turtles

The influence of pedigree will be statistically tested against fitness correlates such as remigration interval, date of first lay, clutch frequency and number of eggs within clutches, hatching and emergence, and hatchling morphometrics.

In addition, a relatedness index will be constructed linking all northern beaches to investigate both population structure (beach fidelity of the breeding females) and to ascertain a more accurate estimate of individual clutch frequency.

As marine turtles are capital breeders (they gain all of their nutrition for migration and reproduction from their foraging grounds) we aim to control for the environmental variables associated with foraging grounds (levels of primary production) and to investigate its influence on the aforementioned correlates of fitness.  To assign individuals to foraging grounds, we’ll ascertain a stable isotope ratio (carbon and nitrogen) from epidermal tissue samples collected from previously satellite tracked green turtles (1998 – 2010).  From these isotopic ratios, we aim to create a reliable isoscape in which known foraging grounds can be identified and additional individuals assigned based upon their isotope ratios.  This will enable us to investigate the influence of foraging ground on correlates of fitness for a large proportion of the breeding population which could not be revealed through satellite tracking alone.

Finally, we will look at the influence of both turtle pedigree and foraging ground on fitness correlates to investigate the recent increase in neophytes.